Around the Word with Kate & Mack, awesome children's book 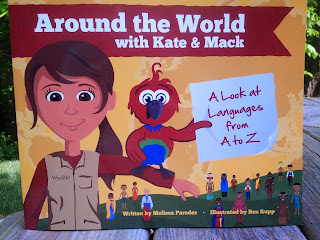 Around the World with Kate & Mack - A Look at Languages from A to Z (Wycliffe Bible Translators) is a brilliant book. Characters Kate and her pet parrot Mack travel the world and meet children from different countries—and they take the young reader along with them.

In each country, Kate and Mack meet a native child who tells them why the translation of the Bible into his or her native language is so important. In some cases, they share how the Bible has been translated and consequently changed the lives of many people including their own. In other case, the child will express the need to have the Bible translated into, say, another dialect that is yet more familiar to them, so they can really grasp it. Either way, children learn the important of the Bible as God’s Word and just how important it is to understand it in one’s own language.

Every page is delightfully colorful with full-page ethnic artwork including pictures of children and animals (hey, every kid loves to see an elephant or tiger right or teeny-weeny miniature frog right?). Each segment representing a country is also jam-packed with all kinds of interesting fun facts, phonetics to help with specific pronunciation of the language or name, and national flags. Even adults can learn a lot from this book.

My only criticisms of this book are as follows:
The chapter on Tunia (page 74) has a section where there is black print on a dark background color, thus hard to read.
The chapter on Waata has a few sloppy sentences and could be better written.

Around the World with Kate & Mack - A Look at Languages from A to Z is a 104 page fun tool which introduces children to the global mission field as they tag along with Kate and Mack and visit different countries and get to know different cultures, languages, ethnicities and needs. I highly recommend this children’s book.

Find Around the World with Kate & Mack - A Look at Languages from A to Z here. This story will also appear in Assist News Service.


www.twitter.com/JaneyDeMeo
Posted by Janey DeMeo at 3:34 PM No comments:

Crackerjack is farcical and humorous. But depending on what you expect when you hear the term Christian comedy,  this movie might seem borderline cheeky.

It all begins when goofy softball player Bill “Crackerjack” Bailey discovers his live-in girlfriend is pregnant—something he is just not ready to handle. Concerned that Crackerjack would follow the footsteps of his own “loser” father who left him when he was young, Crackerjack’s girlfriend seeks Christian counsel.

The story takes place in the south where Christianity and the church culture are woven into everyday life. Thus, we should not be too surprised to see a giant Jesus mascot periodically run onto the church football field raising his arms in the air. Yet, while funny to most people, some people might find a Jesus mascot profane.

The mascot comes into the story when Crackerjack’s, seeking to improve his ways and win back the girl who has now left him, joins a men’s church group softball team. Softball, a stereotype zealous group leader, boyish camaraderie and the Jesus culture, all provide backdrop for hilarious scenarios.

Narrated by Jeff Foxworthy,  and with a good comedian cast (Wes Murphy, Bethany Anne Lind…), Crackerjack could be described as a flippant movie about Bill "Crackerjack" Bailey IV meets church. Inasmuch as it is funny, well-done and Christian—sorta—it could be compared to Moms Night Out.

Crackerjack is presented to us in association with “Modest”, and is a film by Brian Coley “Crackerjack,” and was released on March 17. The movie can be found on Amazon, Google, iTunes, Vimeo and VUDU, as well as On Demand with AT&T, Charter, Comcast, DirecTV and Vubiquity.

Find out more about Crackerjack here
.

Posted by Janey DeMeo at 3:42 PM No comments: 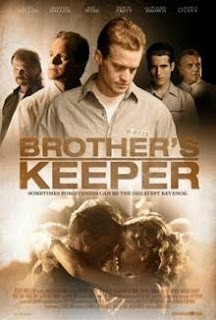 To face the death penalty when you are innocent must be one of life’s worst nightmares. And to face it with no family except for one brother must be even worse. Brother’s Keeper, releasing in theaters this month, is a film of suspense with a message of redemption.

Set in the fifties, Brother’s Keeper conveys the story of two orphaned twins, Pete and Andy Goodwynn, who lost their parents at a very young age and then faced the immense heartache of losing their parents in a tragic shooting.

As twins, the boys shared a special bond, but when their parents died, and they had to fend for themselves, they become tighter than ever. But the tragedy affected the boys differently. They processed their misfortune differently, and filtered it through their individual personalities, which left them with differing worldviews and ambitions.

Pete was drawn to the faith and felt called to the pastorate. He was also in love with his high school sweetheart Maggie and planned to marry her after his graduation. He seemed to have it all together. Andy, on the other hand, was not interested in God—likely embittered by the tragic circumstances surrounding his parents’ death—and seemed lost without ambition. Andy seemed to be going nowhere.

But in an unexpected twist, another tragedy strikes the Goodwynn twins—and Maggie is murdered. Worst still, Pete is blamed for her death. In spite of his innocence, Pete ends up in prison under the death-penalty. The town which is steeped in corruption and conspiracy make attempts to disprove Pete’s innocence and people in high places use their manipulating powers to influence the hearing.

Only a miracle can change Pete’s fate. That miracle may need to come from the most unexpected place and from his own change of heart.

Says Director Josh Mills, “The film addresses multiple themes and shows the raw emotion of how truly difficult it is to forgive in extreme circumstances. It captivates the audience into feeling both deep-seeded anger and compassion for the characters.This film will surprise audiences, forcing them to reevaluate what is most important in their own lives.”

Brought to us by Desert Wind Films and backed by non profit organization, Cleanslate.TV. Brother’s Keeper is a story of redemption, reconciliation, forgiveness and sacrifice. A film that will change your life and keep you riveted to the screen until the end.

This article will also appear in Assist News Service.


http://janey-demeo.blogspot.com
Posted by Janey DeMeo at 12:50 PM No comments: 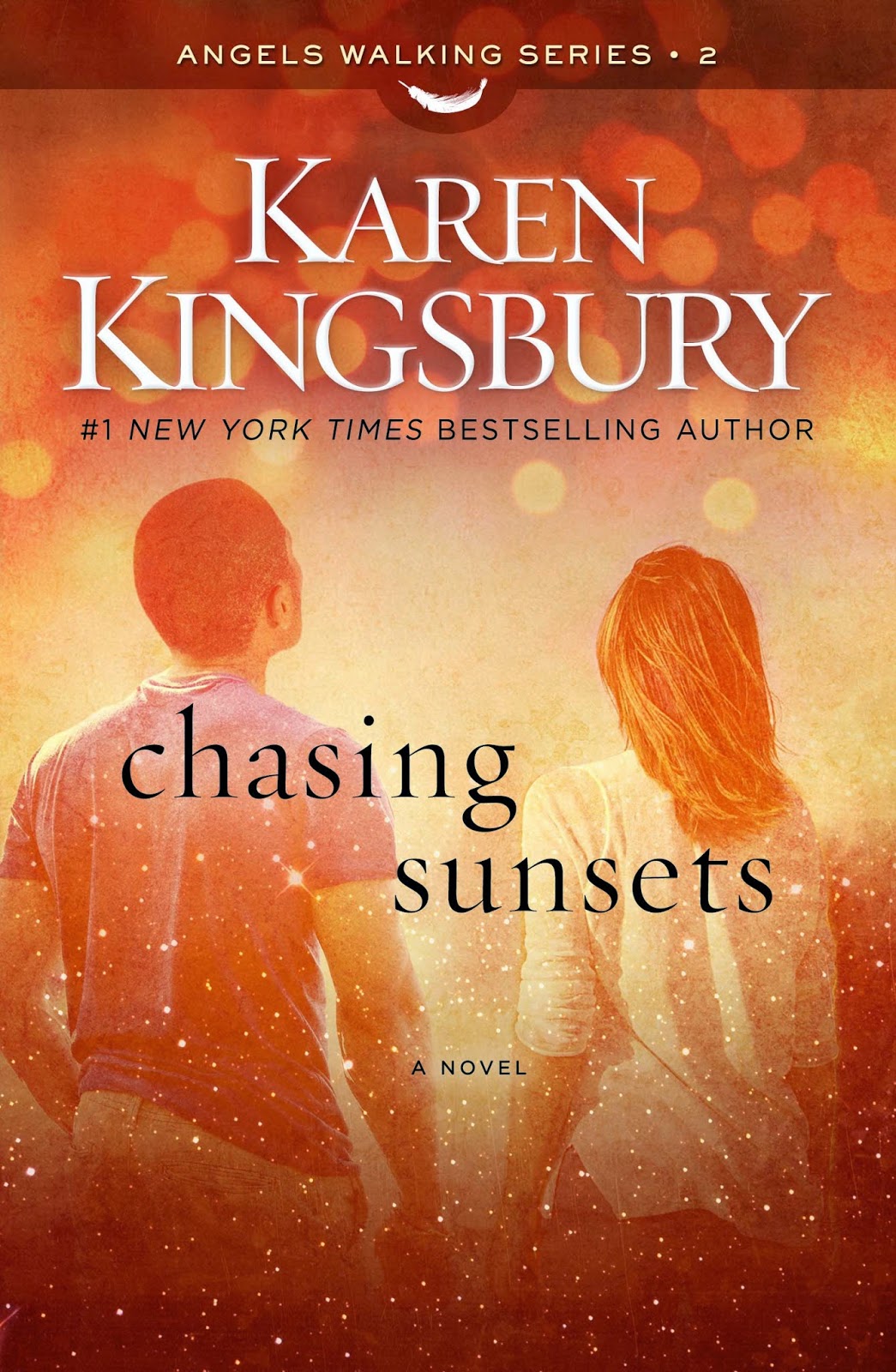 Chasing Sunsets, the second book in Kingsbury’s new series entitled Angels Walking (Howard Books) about angels on mission to earth, takes place in Los Angeles where shootings and crime of all kinds are commonplace—and where fatherless kids find themselves mercilessly sucked into gang activity.

But LA is not just about gangs; it is also home of LA Dodgers and of Marcus Dillinger, MVP baseball player for the Dodgers. And for a season, it is also home to two specially assigned angels, Jag and Aspyn, whose complex mission includes protecting the LA baseball idol and covering Mary Catherine, a girl whose zeal for life and Jesus, grabs his heart—and whose secret struggle nearly breaks it.

Marcus Dillinger wants to use his influence and means to reach the kids on the street, and to help draw them away from gang-bangers. So do his friends, Tyler, Sami, and the lovely Mary Catherine.

Together they create a youth center, but things don’t go as smoothly as they’d hoped. They were not prepared to face such high level violence. They count not have guessed that the baseball idol would become a target for the WestKnight gang, nor expect to see an innocent child brutally shot while his single mother watched in horror. Things were worse than they had imagined but they were determined to make a difference.

As the four friends work towards solutions—and with two angels working behind the scenes—they find themselves mentoring young girls caught up in the gang circles. But just when progress is being made—and the promise of a Christ-centered romance seems to be in the picture—Mary Catherine receives bad news and Marcus is left in limbo, clueless as to what is going on with the girl who has his heart.

The story ends on a note of suspense with no resolve for Mary Catherine and Marcus—a writerly tactic to lure us into the next book in the series.

Kingsbury’s characters are mostly believable although I found myself tripping on a few puzzling details: one angel transforms into a local parent but she has no children (page 33), the other angel is a policeman and “his blond hair framed his face” (page 56), which seems to be the wrong metaphor since police must wear their hair very short. Still the storyline is good.

Chasing Sunsets can be read as a standalone book, but is better enjoyed as part of a series.


http://janey-demeo.blogspot.com
Posted by Janey DeMeo at 10:21 PM No comments: