Nice—no longer such a nice place to vacay

I was asked to write an article on the recent terrorist massacre in Nice from the perspective of someone who lived just a few hours from there for over two decades. My article was first published in Assist News, so feel free to read it directly there -- especially if you want to see more photos that I'll publish here. It is also published on CrossMaps. Otherwise for the basic content, read on. 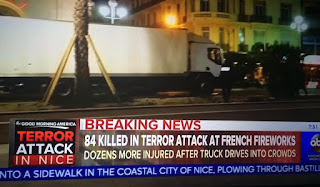 This deadly massacre came just eight months after the deadly terror attack at the Bataclan in Paris (see my article here: http://www.assistnews.net/index.php/component/k2/item/1225-paris-city-of-sadness) and was preceded by the deadly January 2015 Charlie Hebdo terrorist attack. Earlier this year, Belgium was struck with terror, not to mention many other parts of the world, including closer to home in Orlando at the gay Pulse nightclub last month (and in San Bernadino, California in November 2015). The rapid escalation of these massacres is alarming.

But what is it about France that particularly allows such heinous acts to creep in?   Let’s look more closely at what happened in Nice and try to understand.

First take a look at the killer. Tunisian born Mohamed Lahouaiej Bouhlel was a career criminal known to police. He was also a radicalized Muslim. According to Col. Allen West’s recent article, Bouhlel was heard shouting “Allahu Akbar” before opening fire on officers. France’s prime minister Hollande says that Bouhlel “was radicalized very quickly”.  He was known as aggressive and a loner who became depressed when his wife left him. But none of this suggests why someone to open themselves up to radicalization so we need to look at it in its context. France.

As a former missionary ministering in France for 22 years, I will share my experience. Many people we met were charming, but few knew God. And it was nonethless not uncommon to meet people who were also agressive, lonely or depressed. No doubt, an education system which propogates that God does not exist didn’t help; it offers no hope.

We lived in a village between Nimes and Montpellier (where we founded a church and the Nimes Theological Institute). Many of our neighbors were Muslims. Among them, several were violent, and threatened to beat up kids in our church. In our 22 years there, few Muslims received the Lord in spite of our reaching out to them. Only one girl in our Bible college, Naima, was a former Muslim. (She had escaped from Algeria where her life was in danger because she had received Christ via a radio broadcast.)

Our strategy to reach the Muslims was no different than the way we hoped to reach everyone else:: prayer, friendship (where possible), evangelism.

We often rose early to walk around the village and pray for souls. Many people from our church joined us. Then, every Saturday night, together with people from our church, we would evangelize in Nimes, Montpellier or even Marseilles—a port city about 1½ hours from where we lived, which is reportedly 40% Islamic. And, one of my favorite activities, on Saturday afternoons, we held a Bible club for kids living in the Zup (aka project areas). Many of those children came from Muslim families. We would ask the mothers (we rarely saw any fathers) if we could take the kids for a few hours to play games, enjoy a yummy snack and—wait for ii—teach the Bible. Perhaps the prospect of getting rid of their kids for a few hours was too much to resist; many let the kids come.

But here’s the cruncher. Contrary to French people who average one child per family, sometimes two, Muslims have many children. They are encouraged to proliferate and thereby take over nations. So we typlically had, for example, Achbed, Rachid, Mohamed, Karim and Moustafa—all from one family. This was between 1981 and 2004. Thus, all those children are adults today. To my knowledge few are going on with Jesus today, but all of them who attended regularly heard the Gospel. When things get rough, let us hope they will remember who the real God is.

But what about all the Muslims who never hear the Gospel? When we lived in France, there were reportedly only ½% evangelical Christians in the nation. No wonder we never came across another church or Christian evangelizing. Such absence of the Gospel message leaves a vacuum. And together with a sense of hopelessness, vacuums can open doors to dangerous ideology.

It is worth noting that France, like the UK and Germany, has opened her arms wide to refugees and particularly those from Muslim countries for decades. Marion Maréchal-Le Pen, the Front National MP for Vaucluse sees this as a link to terrorism. In a video posted on Facebook, she recognized that terrorism is the killers goal, but suggests that it is fostered by excessive immigration. "Those also responsible are those who each year allow a number of immigrants equivalent to the size of the city of Bordeaux, to legally enter France" states Maréchal-Le Pen. She also tweeted, “If we don’t kill Islamism, it will kill us.”

Whether we agree with those statements of not, it seems that France has reached a tipping point. And it came about progressively, slowly, like boiling a frog. And while the influx may have begun in part because France feels bad about colonizing Algeria in the 1800s, it is now a way of life and will probably not be stopped. So what can we do? I do not pretend to have all the answers but here a biblical response. Let’s pray for laborers to go into the harvest, for churches to actively live and preach the Gospel. Let’s pray for souls and evangelize.

Who knows. God might put someone on our path who doesn’t yet know Jesus but who, like my husband and I, may end up church-planting and evangelizing in France. Some sow, some water. Everyone has a part to play. What is yours?


http://janey-demeo.blogspot.com
Posted by Janey DeMeo at 7:56 PM No comments:

A World Without Orphans Imagine a world without orphans, a world where every child belongs to a family who loves and nurtures them. That sounds like Heaven right? But how could such a world this side of Heaven come about? A World Without Orphans highlights how this can happen. Through real-life stories, the film shows that if we all do our part, whatever part that may be, it is possible.

I was first introduced to A World Without Orphans at the Christian Alliance For Orphans (CAFO) 2016 Summit in Orlando. (Orphans First is a member organization of CAFO.) Since we, like other likeminded organizations, strive hard to get children into families, this film really caught my eye. And my heart!

In fact, I would go as far as to say that producers Dianne Becker and Brittany DeVries together with Steve Saint from ITEC have captured God’s heart and shown a glimpse of it through this heart-touching film.

Experience and statistics prove that children thrive best in families. For those of us who have kids or grandkids, we can’t imagine what it would be like if they didn’t have us. Right? The key, therefore, is to find families for orphans and foster children. And the best place to find them is within the church community which can also provide a concrete support system for those who take children in. (We’re talking about spiritual, emotional and physical support—not just a paycheck.)

In Africa, for example—and I know this firsthand—most children have at least an extended family relative who could take them in if there was a solid support system to help them. Where there is no extended family, there may be neighbors who genuinely care for the children. And when the local church wraps around them to provide physical, spiritual and emotional support, there is a recipe for success. (Not that it is easy. Life with kids is always messy. But it can be done and, as depicted in A World Without Orphans, children can live wholesome, happy lives.) 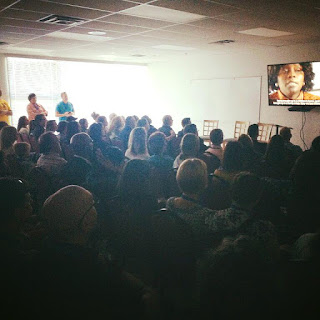 A World Without Orphans is both inspiring and challenging. It calls us to consider the biblical mandate to take care of orphans and to seriously probe our hearts as to what we can do to make this happen. Not everyone can take an orphan into their home, but everyone can do something to help someone do this—beginning with prayer.

I believe in the message this film propagates. Our Orphans First children’s homes in India are “homes” not institutions—and they function as Christ-centered families. I’ve seen the difference in the lives of our kids as they grow up and know they are loved by house-parents and the local church. Many have gone on to serve Jesus and have families of their own. In Mexico, we support some extended families who have taken in children whose parents have been killed through bad drug-deals. In Siberia, through our local church partners, we try to bring children in to foster homes. Local churches and their families provide hope and stability to orphans.

Imagine what could happen if every church showed a screening of A World Without Orphans. It could become a reality. If you would like to host a screening at your church, contact A World Without Orphans via their Facebook page. Please be sure to "like" and follow them on Facebook to create more buzz and to receive notices of upcoming grassroots or festival screenings. You will also find great articles of interest related to the cause.

Check out the trailer here.

The movie can also be purchased and downloaded here at www.christiancinema.com. And keep checking the website. There will soon be subtitled versions available in both Spanish and French.

This article will also appear in Assist News Service.

As a P.S. to this article, let us not stop praying for Lexi who was ripped from the loving family she had thrived in for some 4 years. Let us pray for God to bring Lexi home.


http://janey-demeo.blogspot.com
Posted by Janey DeMeo at 11:34 AM No comments: