Faith of our Fathers, excellent movie

Faith of our Fathers is a highly entertaining film, which weaves tension and tragedy with humor to bring an inspiring Gospel-centered story.
The central theme surrounds two young men who desire closure from their fathers’ early deaths during the Vietnam war.

Protagonist John Paul George—played by Kevin Downes (Courageous, Mom’s Night Out)—can’t help but think of his deceased father as he prepares for his upcoming marriage to Annie (music artist Rebecca St.James). Wanting to know how his father died during the Vietnam war, George sets out to find a man who was his dad’s war colleague and who may have answers.

George’s quest leads him to a strange, unpolished character, Wayne Adams, who wants answers about his own father’s death in the Vietnam war. The two fathers were in the war together. So, as a double quest, George and Adams set off to DC to visit the Vietnam Veteran’s Memorial Wall.

Wayne Adams—played by David A.R. White (God’s Not Dead, Mom’s Night Out)—is an annoying person with few scruples. But there’s more to this rough-neck than meets the eye. David White portrays this role brilliantly and with an uncanny Owen Wilson air about him.

The story’s honest treatment of war and the pains of losing a father are emphasized by the use of flashbacks showing the two military fathers in action during the war. Amidst hardships and humorous detours, both sons eventually find closure as they unwrap the Christ-centered legacy their fathers left—a legacy that bonds them together like brothers.

In an interview on The 700 Club, producer/writer/actor Kevin Downes and actor Stephen Baldwin, who played Sargent Mansfield, share their passion for the movie and their desire to see Vietnam vets honored. Baldwin expressed that the film emphasis “no greater love.” He talked about how unresolved questions can keep people from God, but “This film helps by addressing these issues.”

Downes too expressed how important it is to honor the sacrifices made for our freedom: “There are 58,307 names on that wall. Every one has a story that should be honored!” His favorite line? “This is why we need dads.”

In commemoration of the 50th anniversary of the Vietnam War, Faith of our Fathers comes out in theaters on July 1st.

Find out more about Faithof our Fathers here.

Return to the Hiding Place, movie 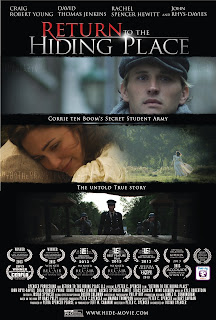 If you were inspired by Corrie Ten Boom’s story as portrayed in The Hiding Place, then you’ll surely love the movie Return to the Hiding Place.

Bases on Hans Poley’s autobiography of the same name, the true story of Return to the Hiding place provides a more indepth look at what Dutch Christians—including Corrie Ten Boom and her sister Betsy—did to rescue Dutch Jews in Holland during the Holocaust.

Hans Poley and fellow students are deeply disturbed by the horrific persecution of Nazis towards the Jews. They cannot sit by and watch and so they turn their youthful zeal to form their own Resistance Army—risking their own lives.

These untrained young resistance fighters live clandestinely in Corrie Ten Boom’s home and embrace dangerous challenges as they set out to rescue as many Dutch Jews as possible from the Holocaust.

Return to the Hiding Place stresses positive values and shows how the virtues of unity, endurance, perseverance and faith can change the course of history. Interesting, inspiring and sobering at the same time.

The movie was directed and produced by the father daughter team of Peter C. Spencer (Heroes of the Titanic, Justice for the Wounded) and Petra Spencer Pearce (“Heroes of the Faith”), and its prolific cast includes John Rhys-Davies (Indiana Jones, Lord of the Rings), Craig Robert Young (“NCIS: LA,” “Hawaii Five-O”), David Thomas Jenkins (“CSI: Miami,” “Bold and the Beautiful”), Rachel Spencer Hewitt (Fly by Night, A Civil War Christmas) and Mimi Sagadin (The Dilemma).

Find out more about the movie here: http://www.hide-movie.com/.
Like it on Facebook: https://www.facebook.com/ReturntotheHidingPlace
Look for tickets here: http://www.fandango.com/returntothehidingplace_173707/movietimes


JaneyDeMeo.com
Posted by Janey DeMeo at 3:08 PM No comments:

Beyond The Mask, action-packed faith-based adventure

As far as faith-based movies go, or even action-packed adventures, Beyond The Mask is far from typical.

Beyond The Mask is both high action and with a strong Christian message, but special effects and superb photography combined with a really good plot make this film comparable to anything Hollywood has produced. Add to that the historic thread and top-notch acting and you have a winner.

The plot centers around Will Reynolds, a Brit who is top mercenary for the British East India Company. When Reynolds comes to the rude awakening that he has been hoodwinked and framed, he makes a run for it in the American colonies hiding his true identity behind a metaphorical mask. It is in this setting, posing as someone he is not, that he falls in love with Charlotte and is also introduced to faith.

But it does not take long before Will’s enemy and former employer—the very man who had conspired against him—creeps into his life again and unmasks him, albeit by the use of deceit.

Will’s only hope is to attempt to redeem his past and prove his sincerity to his beloved Charlotte—and to gaining the trust of Ben Franklin—both of which lead him to adopt the courageous role of a type of Zorro figure who uncovers evil plots. Thus, Will Reynolds finds himself donning a real mask.

Beyond The Mask is the brilliant creation of cousins Chad and Aaron Burns, two young men who are credits to the power of homeschool education. Brought to us by Burns Family Studios, this stunning movie comes out in theaters on June 5th.

Find out more about Beyond The Mask here: www.beyondthemaskmovie.com. Look for the movie in your local theater listing.

Not your typical Christian movie—but clearly Christ-centered, and absolutely worth seeing. As MoviePilot.com says, “Simply put—Amazing!”


www.twitter.com/JaneyDeMeo
Posted by Janey DeMeo at 6:43 PM No comments: