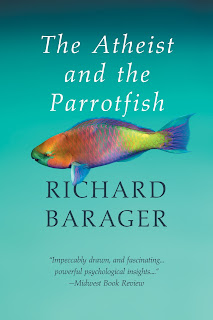 The Atheist & The Parrotfish by Richard Barager tells a complex but compelling story probing some hardcore human issues. Atheism, transgenderism, guilt, death, relationships… It’s all there.

A cross-dresser, Ennis Willoughby, is in need of both a new kidney and a new heart. His hope of a double transplant is in the hands of his nephrology doctor, Cullen Brodie.

The two organs suddenly became available through the tragic death of a woman who, coincidentally, had worked in the very medical center where Brodie works. In spite of Willoughby’s age (in his sixties), the doctor ensures that his patient is the recipient of these vital organs. Everything seems to go well until an odd phenomenon occurs.

Ennis Willoughby – whose female side he calls Emily – feels an uncanny connection with his anonymous donor.

Ennis tells Brodie as well as his psychiatrist, Becky, that he knows who his donor was, he is convinced her name is Carla, and even odder is that he suddenly experiences new tastes that no doubt came from her. He feels he has received Carla’s soul as well as her organs.

In spite of things that Ennis suddenly knows and feels that cannot be explained, the two doctors resist his theory.

Meanwhile, Brodie has his own demons to fight. An untimely death and a broken-up relationship with the love of his life make for a heavy past which forever lurks in the background. Unable to come to grips with what happened, it is easy to just become a staunch atheist living as you please. God cannot logically exist, it’s as simple as that! But underneath this belief system, there is deep pain – pain he drowns in promiscuity and large living.

Underneath it all, question about God’s existence keeps on popping up.

Carefully crafted narrative weaves in scenes from Brodie’s past as well as Willoughby’s. Several other key characters are brought in, adding to the story’s complexity and brilliance. Unexpected twists and turns keep the reader riveted.

Barager, who is himself a nephrologist practicing in Southern California, employs a rich vocabulary, subtle imagery and a stunning knowledge of culture, including the arts, overseas societies and much more.

However, as well as a rich vocabulary, the author does not spare us from sexually charged content and crude language—all of which serve to paint an authentic picture of the characters. Thus, the book would not be classified as “Christian” per se, and would not be a good fit for everyone.

The Atheist and The Parrotfish (Evolved Publishing, May 2017) is a fascinating, well-written read. A page-turner rom the get-go.

For more information, please visit www.richardbarager.com and connect with him on Facebook, LinkedIn and Goodreads.


http://janey-demeo.blogspot.com
Posted by Janey DeMeo at 11:31 AM No comments: