Finally, one month after the earthquake, there’s talk about releasing the ‘Ten Baptists’ accused of attempting to abduct Haitian children after trying to bring them to an orphanage in the Dominican Republic. Like many people, I’ve watched this case incredulously and prayed. Prayed for The Ten; prayed for the children, and prayed that those of us involved in Haiti relief efforts would sharpen our ears to hear God and hopefully avoid unnecessary blunders.

I’ve also considered the multiple factors that complicate this issue.

My first thought was, Why aren’t the USA president and state department going to bat for these people? America has poured millions of dollars into Haiti since the earthquake took place last month – a catastrophe that’s estimated to have killed some 250, 000 people. You’d think they’d use their leverage to help free these people who obviously had good intentions, albeit with a shortage on wisdom.

But then I got thinking some more.

Haiti is known for its corruption. We got a whiff of this when The Ten fired their lawyer because he allegedly asked for $ 60, 000 in exchange for their release. This is to be expected. After all, that lawyer knew, as most people do, that America has raised millions of dollars for Haiti. Perhaps he wanted his piece of the pie. That is the way it works in most third-world countries and Haiti is no exception

But that doesn’t explain why America wasn’t more pro-active in defending their own. My friend, Doug Wead, offers some interesting insight on that issue. He suggests that the usual prejudice against Christians is probably at stake here.

(Certainly, given the fact that the Major of Lancaster, California was recently rebuked for making a statement about his area being predominantly Christian, and other similar instances, it is certainly true that even America has become increasingly hostile to Christianity.) Wead points out that Haiti wasn’t even on the media’s map before the earthquake. Yet, it has always been on the prayer map of Bible believers—which is why the Ten Baptists were there in the first place.

In spite of the good intentions of the Ten Baptists, I think their unfortunate incarceration has a lot to teach us. I can’t help thinking the situation could have been avoided from the get-go if the gal leading The Ten, Laura Silsby, had simply done her homework. You don’t try to take children out of any country without proper paperwork. Such a move would clearly ruffle some official feathers and opens a door for suspicion and attack.

Silsby apparently lacked good judgment. She apparently ignored sound advice when it was offered her—advice that might have saved a lot of people from a lot of trouble.

That can happen to the best of us. Still, I’m puzzled. When asked by journalists if she thought she owed an apology to the Haitian authorities, Silsby replied, “No!” – and that she was talking with them.

Why say “No!”? Why not simply apologize in humility for the sake of diplomacy, and testimony? After all, no matter how you look at it, she was wrong. Her heart may have had good intentions, but she acted wrongly. Doesn’t such an error merit an open gesture of remorse to sow peace? Maybe she just didn’t hear the question? Or maybe she thought she was “right” to withhold an apology – something that would seem to contradict sensible Christian ethics.

In some respects, the answers to “why” are not really our business; it’s not our place to judge. What is important is that we take heed and learn so that we can avoid unnecessary heartaches – to walk as wise as serpents and gentle as doves in our endeavors to serve our King (Mat.10:16). I think this story serves to remind us that wisdom is given as a gift to those who ask for it (James 1:5) – and that it is given so we don’t mess things up so much.

Lessons learned so far from the Ten Baptists’ mishap:
Seek advice, heed advice
Do your homework
Seek wisdom, & forethought
Be aware & beware of corruption -- & use extra foresight
Be humble, be teachable
Don’t judge people’s motives, but learn from their mistakes

Silsby’s lack of foresight unleashed an avalanche of problems (and I’m not just thinking of the other nine Baptists that naively followed her do-good intention who’ve spent almost two weeks in Haitian jail). Her decision has more than upset the apple-cart for hundreds – maybe even thousands – of orphans who were granted humanitarian parole to come to America. Since this incident, their exit has been jeopardized – prohibited by some nebulous red tape which requires that Prime Minister Bellerive personally evaluate each case to give his stamp of approval before a child can leave Haiti to join their waiting, adoptive parents.

Just how long will it take for Bellerive to investigate each case – and how much more money will that demand? Given that a normal Haitian adoption takes about three years, and is expensive, this new state of affairs does not look promising. Still, we must not give up hope, but keep praying. God has already done so many miracles during this crisis. He will do more.

One way God will bring about long-term solutions and miracles is through the unity of the body of Christ. Orphans First has partnered with Haiti Orphan Relief Team. We hope to achieve more together to help the children of Haiti than independently. I believe we will. 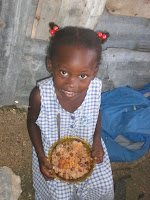 Here’s a story that, to the natural eye, seems to have fallen short of a miracle. But if you dig deeper, as this author did, it is a picture of redemption. I thought it appropriate to include it here. Adopted for life . . . and in death.

Oh, sweet Haitians, may the Lord comfort your broken hearts and nourish your bodies. May He wrap His loving arms around you and whisper His love deep into your hearts. And may He help us to humble ourselves, to give more of ourselves so that you may see more of Him. Amen.

This is Your Brain in Love

I always knew sex and love are brain-related. This is Your Brain in Love – New Scientific Breakthroughs for a More Passionate and Emotionally Healthy Marriage by Dr. Earl Henslin confirms my hunch.

Henslin explains what happens in the brain when a person is in love, and why the initial intoxicating sensation fades. More importantly, he explains how to develop a satisfying marriage by recognizing your type and thus your potential brain hang-ups. It all starts in the brain.

According to Dr. Henslin brain imaging highlights the precise area where our hang-ups hang out. Identifying them helps us to learn how to bring our best brain into our marital relationship so that it sizzles—or at least satisfies.

Explaining how brain patterns differ in these different types, Henslin shows how to regain lasting passion no matter what your lover type is.

As a pastor’s wife counseling women about marriage, I find this book practical and revelatory—useful to anyone who wants to enhance their marriage, or help others do just that.

I reviewed this book as a Thomas Nelson book review blogger and I’ll use it as a useful resource in counseling couples.

Posted by Janey DeMeo at 7:23 PM No comments: