A Lady's Honor - a cliffs of Cornwall novel (Zondervan) 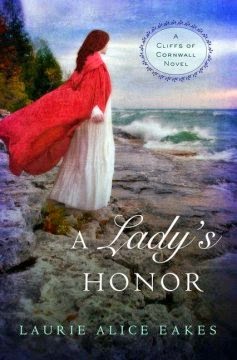 If you like 19th Century romances set in England, you might enjoy A Lady’s Honor - A Cliffs of Cornwall Novel by Laurie Alice Eakes, published by Zondervan. But if you’re looking for a story that is easy-to-read as in well written, this book falls short—a pity as it detracts from an otherwise decent plot.

For example, at the beginning of the novel (page 3), as the reader is being lured into the drama, an annoying little French phrase pops up, “Souvenez vous qui vous etes.” The phrase is apparently the protagonist’s family motto—“remember who you are”—but the French is incorrect; it should be “Souvenez-vous qui vous êtes” or “rappelez-vous qui vous êtes.” The phrase is repeated once again in French a little further into the novel but we still don’t know why a Trelawney would speak French—especially incorrect French. Is it supposed to clue us into the fact that she’s well educated? If so—and one can only guess as no explanation is given—wouldn’t the French be accurate?  Sigh!

Ok, fair enough, so you might not get the French. But take a look at this sentence: “…Her grip would surely crush his fingers. Her cries would surely deafen them…” (page 284). Hmm. Deafened fingers? Oh yeah, she obviously means deafened people, but why should the reader have to do be stumbled by ambiguity? It interrupts the flow.

And there are many more mistakes. But what about the narrative?

A Lady’s Honor tells the story of a young girl, Elizabeth Trelawney, whose struggle to win approval and to live up to what she thinks others expect from her in order to merit their love keeps her from pursuing her own heart. She especially values the endorsement of her beloved grandparents who require more from her than just good behavior.  In order to inherit Bastion Point, the only place she ever felt was home, Elizabeth must discover some kind of treasure.

With smugglers doing their dirty business and killing people who get in their way, Cornwall is not a safe place. After the death of a friend, Conan, Elizabeth and her female cousins may be in danger. And the man who has set his heart on helping them, Rowan Curnow, has also set his heart on Elizabeth. But his is not a match for Elizabeth Trelawney—not if she is to keep in good standing with the grandparents.

A Lady’s Honor is a Christian novel and, on that level, it presents a clear message about God’s unconditional love.

A link to this story also appears in Assist News Service.


www.twitter.com/JaneyDeMeo
Posted by Janey DeMeo at 10:18 AM No comments:


Just in time for Mother’s Day, Moms’ Night Out, a brilliant comedy, opens in theaters on May 9th. And if you’re a parent or have children in your life, or just enjoy a good guffaw, you won’t want to miss this movie. It has all the elements of belly-aching hilarity with a whopping dose of ouch-that-hits-home.

Starring Patricia Heaton (The Middle, Everyone Loves Raymond), Sean Astin (The Lord of the Rings, Rudy) and a crew of other top-notch talent, this film is brilliant.

Read my full review in The San Diego Christian Perspectives Examiner, and in Assist News Service.

www.orphansfirst.org
www.twitter.com/JaneyDeMeo
Posted by Janey DeMeo at 10:24 AM No comments: