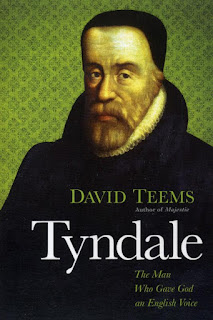 David Teems’ book, Tyndale: The Man Who Gave God an English Voice is both eloquent and enlightening. Not only was the Bible not available in plain English for anyone to read, but those who were able to read it in its original languages found themselves in great danger—danger of imprisonment, torture and death. Such was the case of William Tyndale to whom we owe our quintessential English Bible. He became an archenemy to the religious establishment because he set out to translate the Bible into plain English.

Tyndale, a strong believer who loved God’s Word with a passion, drew directly from the original Hebrew and Greek texts to translate the Bible into contemporary English. He took advantage of the then “modern” printing press and was the first to produce the new English Bibles of the Reformation. However, this translation—and the fact that the average man could read it and understand it—posed a threat to the despotic Roman Catholic Church and the church's position on many things as a whole.

David Teems, an articulate writer, depicts the austerity of manipulative religion overshadowing fifteenth century society in England and her surrounding European countries. Teems brings William Tyndale’s character to life as he describes his lifestyle, convictions, and deep love for the Bible. We almost hear Tyndale’s heartbeat and follow his thought processes as he carefully weighs which word to use, even which expression to choose so that the Bible make sense to the then-modern reader. And Tyndale nailed it!—so much so that much of the King James Bible was taken from Tyndale’s translation.

Teems quotes Scriptures throughout his writing, masterfully bringing the reader into the word-weighing process. He compares the language to Shakespearean English and other sources to show how carefully Tyndale crafted his translation to reflect the original intent and still make it tangible to the English reader. Tyndale was relentless and took great pains not to deviate from the original texts. And he showed great devotion to his Lord and Savior in the process—something that cost him his life.

More than just a biography of William Tyndale’s inspiring life, Tyndale: The Man Who Gave God an English Voice is also a recount of the backdrop for the ushering in of the Reformation. For those who want to understand history and how the original English Bible was birthed, this book makes for passionate reading. But be careful. It is no light reading matter.


www.twitter.com/JaneyDeMeo
Posted by Janey DeMeo at 8:59 PM No comments: