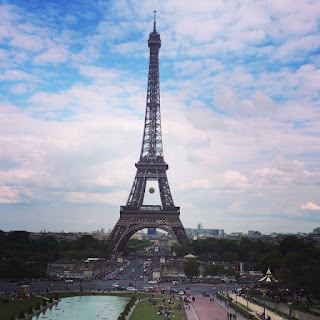 The Paris terrorist attacks that killed at least 129 people recently were not only tragic, they were sadly inevitable. Following decades of welcoming Muslim refugees and immigrants into France, this otherwise spiritually vacant country has been a ticking bomb in the middle of Europe.

Not that other European nations don’t have a huge Muslim immigrant problem—they do—but France leads the way with an estimated 10% per capita. (It’s worth noting that France also led the way for the eighteenth century Enlightenment period when they officially booted God out. They have taught atheism in schools ever since. No wonder people hungry for spirituality flock to Islam.)

The port city of Marseille—just an hour and a half away from Nîmes, the town I called home for twenty-two years—boasts a 40% Islamic population. One problem here is that Muslims have huge families while the French do not. (We cannot ignore the fact that while peaceful moderate Muslims do exist, there is nonetheless a huge contingent who is sent to the West as part of a plan to infiltrate.) But the problem becomes more complex in light of the fact that there are so few evangelical Christians (less than 1%). This means that although there are a few nominal Catholics in France, most people are atheists or Muslims.

As missionaries and church planters, my husband and I felt the darkness every day. Of course, we were probably seen as enemies by both atheist and Muslim neighbors because we weren’t in France to just do business per se; we were there to share the Gospel. And that upsets some people.

But from our perspective—and perhaps we were just young and naive—we saw it as an opportunity. An opportunity to share the love of Jesus with those who didn’t know Him (and many who had never even heard the Gospel ever). It was an opportunity to let people know that God sent His Son to save them because He loves them. We did this in every way we could and this included the creation of a Saturday club where kids could come and learn about Jesus.

The Saturday club was especially effective in the local “zup” (project area) where most moms—half of whom were Muslim—were just glad someone would take their kids for the afternoon. (Remember. Muslims have many kids.) We told the moms that the club would provide fun activities including teaching Bible stories and yummy food. Maybe it was the word “food” that got them (I don’t know)—or maybe it was because people were praying for our work—but many kids were allowed to come. And they all heard the Gospel loud and clear.

One young man, Ange, now in his mid-twenties, remembers the warmth he felt every Saturday and how much he loved learning about different Bible heroes. While France remains dark, for kids like Ange, seeds were sown and those stories are still in their hearts.

But it wasn’t always so jolly. There were times when the stench of radical Islamic aggression was undeniable. For instance, a group of young Muslims prowled around our village with baseball bats threatening to kill some kids in our church. On the rare occasion when a Muslim would come to know Jesus, his life would be quickly threatened by friends or family, and before long he’d leave the church. One girl, Naima, came to our Bible school from Algeria where her life was in danger since her conversion. She had heard about Jesus via radio and sought refuge at our Bible School in Nîmes. Fear was just par for the course among those who turned from Islam to Christianity.

In 1999, a week after my husband Louis testified Washington, DC before congress about religious liberty issues in France, four cars were blown up on our campus. The police never found out who blew those cars up. We don’t have a clue. But when you think of the recent attacks in Paris and the previous Charlie Hebdo attack, you can’t ignore the possibilities of terrorism.

Don’t misunderstand me. France is a beautiful country. The people are lovely and the food is the best in the world. But France is far from living up to her motto: “liberté, égalité, fraternité” (freedom, equality, brotherhood). France has tolerated the Islamic influx to the point of losing her identity. She has accommodated refugees, rewarded them for having lots of children and is now harboring terrorists. (Don’t forget, some of the terrorists in the recent attacks were home grown.)

So what’s the answer? I have to confess that I don’t know. But here’s a good start. How about the church waking up, praying hard and rising to the call to go into all the world and preach the Gospel?  We have been called to be salt and light, to go into every nation and to make a difference. That doesn’t mean being a pc wimp. It means becoming pro-active culturally, politically, speaking up for truth, and especially making disciples for the Kingdom of God.