Noah, a Bible story told only through pictures 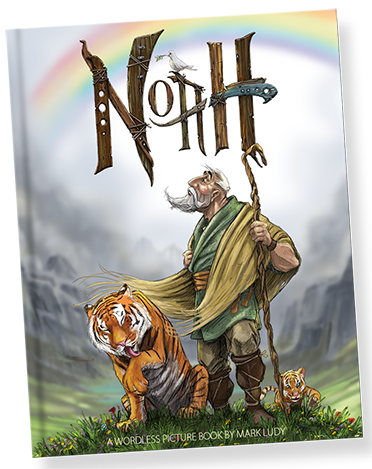 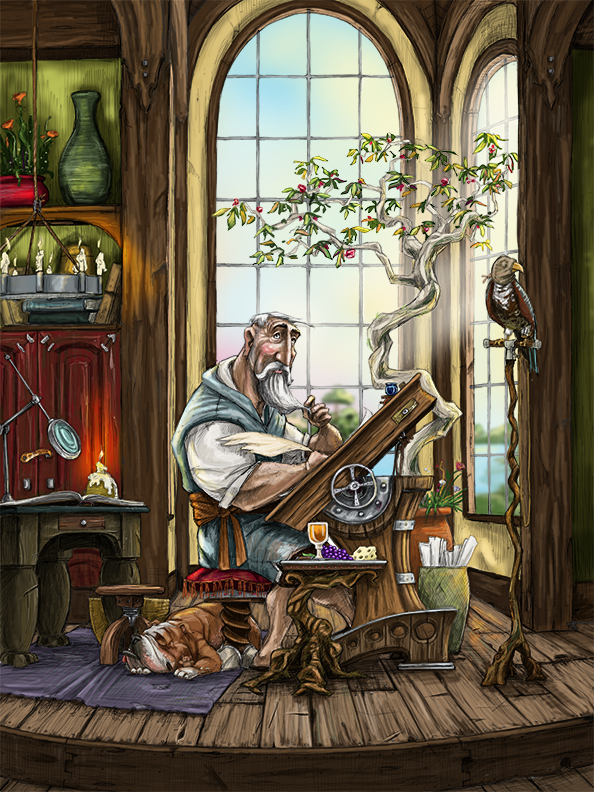 If you are fed up with children’s Bible story books that use catchy narrative but which deviate from the biblical text –  or if you like books with lots of colorful illustrations – then here’s a book that just might fit the bill: Mark Ludy’s Noah, A Wordless Picture Book (Plough Publishing House).

The sensational story of Noah is a favorite among children and adults alike. Hey, what is not to like about hundreds of animals, a scary flood, a humongous boat, and the first rainbow? Sadly though, many versions of the Noah story ignore many essential elements of the biblical narrative. Some—the recent Noah film for one—deform the story altogether.  In his Noah book, Mark Ludy invites us to wrap our imaginations around the original, biblical Noah story—through pictures.

30 double-sided glossy pages of colorful illustrations bring us into a world that we could imagine to be similar to Noah’s world. Contrary to Hollywood’s portrayal, Ludy’s artwork depicts a loving, God-fearing family who enjoy God’s creation – and a patriarch who seeks to implement God’s precise architectural design for the ark.

However, although the illustrations are delightfully detailed, not everyone will appreciate the comic book style, which mirrors Asian graphics.

The large book dons a colorful hard-back cover without the overlaid paper cover (a blessing when you think of how often kids can’t resist the temptation to tear those paper overlay covers).

Mark Ludy’s Noah works for both adults and children. Makes a great coffee-table book, a gift or stocking stuffer for an extra large stocking. Listed at around $ 20, this book is a bargain.

This story will also appear in Assist News Service.


www.janeydemeo.com
Posted by Janey DeMeo at 10:18 PM No comments: 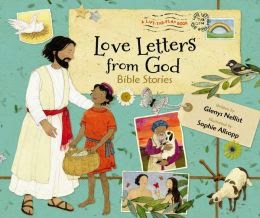 The Bible is filled with wonderful stories that delight children. But it takes a good storyteller to engage young children and related the stories to their little worlds. As seen in her latest children’s book, Love Letters from God (Zonderkidz) Glenys Nellist is that kind of storyteller.

Love Letters from God contains about twenty beautifully illustrated Bible stories, each accompanied by Scripture in the section “God’s Wonderful Words to You” and with the added bonus of a “Love Letter from God”—a stamped card envelope in which opens to reveal a letter crafted from principles from God’s Word. An underlined space allows for the child to write their own name and personalize the letter.

Gorgeous artwork by Sophie Allsop adds to Nellist’s captivating narrative with its catchy titles such as ‘The Sneaky Snake,” “The Very Smelly Belly,” and “The Super-Duper Picnic” to name just a few.

The book comes in an attractive, colorful hard-back cover with glossy imprints superimposed on matt paper. Delightful—until the child destroys that outside paper cover, of course. But, even if that paper cover does get destroyed, the hard cover underneath is adorned with the same artwork but without the glossy effect. Phew!

This book is large and might have worked better on a smaller scale so that young hands could grasp and flip through at their leisure. As is, the size is a little awkward for young children to hold and browse through on their own.

Love Letters from God is aimed at children 4-8 years old. For children nearer the older side of the spectrum though, I suggest reading the Bible’s actual rendition of the story as well as Nellist’s version, since her stories are abbreviated fun adaptations Scripture. Nothing bypasses the need for pure Bible reading—especially for older children.

Too big to stuff in a stocking (unless you have a huge stocking) but definitely makes a great gift for young’s.

This story will also appear in Assist News.


JaneyDeMeo.com
Posted by Janey DeMeo at 1:52 PM No comments: 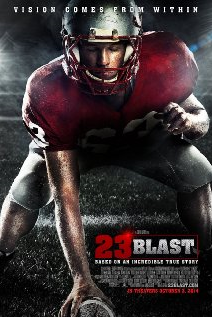 23 Blast, based on the true story of Travis Freeman, is a film of tragedy and hope, darkness and light.

When Travis Freeman a high-school football player, became blind from a football accident, his world, his hope and future looked to have come to an end. How could such a tragedy hit someone so young and so talented?

Freeman, played by Mark Hapka (Day of Our Lives, Criminal Minds), has not only lost his sight but his ability to live out his passion and continue playing football. But that passion will not quit and he finds himself dreaming football every time the game is played without him.

Friends, family and therapists help push Freeman along to a life worth living in spite of blindness.

Coming to theaters on October 24th, you don’t want to miss this film. Ocean Avenue Entertainment and K-Love/AIR1 radio have teen up to support this family-friendly feature film, 23 Blast.

So, what does Travis Freeman think of the movie inspired by his story? Check out my interview below.

JD—HI Travis, good to meet you. Were you a strong believer before losing your sight?

TF—Yes. I professed faith at age eleven, the summer before I lost my site. (I lost my site at 12-years-old.) Thank God, I was grounded in the faith by a strong family.

JD—How did the film affect you? Did you find yourself reliving that period of your life?

TF—Yes, definitely. But the film is not the Travis Freeman story. It is only loosely inspired by my story. But the film does a good job and gets the message across.

JD—What was it lie to play football blind?

TF—Disability is not equal to inability. When we have strong faith, we can overcome obstacles. When I became blind, my life was turned upside down. It took me a year to learn to live life again. And by the end of 7th Grade, I’d assimilated back into normal life.

So in August 1994, I became the first blind football player. It wasn’t anything special to me. I was living my life. It seemed normal. It wasn’t spectacular to me.

JD—When did you feel the call to serve God and what are you doing now?

TF—When I was a sophomore in college. I then graduated from the University of Kentucky, then got my Masters of Theology and a Ph.D. from the Southern Baptist Theological Seminary. I’m presently an adjunct professor at the University of Cumberland.

In the future I’d like to teach full-time as a college professor and, at some point, to travel, write and speak. Also to focus more on the Travis Freeman Foundation: http://www.travisfreeman.org.

Travis has also written his autobiography, Lights Out, Living in a Dark World. Find it on his website.

This story will also appear in Assist News Service.


JaneyDeMeo.com
Posted by Janey DeMeo at 5:21 PM No comments:


If you’re one of the 65 million people who have read the New York Times bestselling end-times book series Left Behind co-authored by Jerry B. Jenkins and Tim LaHaye, then you might wonder if the movie of the same name will do the story justice. Well, it does. Left Behind starring Nicolas Cage is epic.

An apocalyptic fictional drama Left Behind, the end begins is based on a generally accepted interpretation of biblical revelation concerning the “rapture” of the church—a time when believers in Jesus will meet Him in the air unleashing the darkest seven years in history.

Rayford Steele (Nicolas Cage), husband, father of two, and pilot with Pan-Con, had planned an adulterous getaway with beautiful airhostess Hattie (Nicky Whelan) when disaster hits. Half the people in his plane, including children, have mysteriously and suddenly disappeared—leaving those who remain in total panic.

Read my full review of Left Behind in Assist News Service. Also in The Examiner.