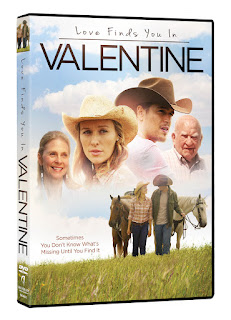 For those who enjoy romance, horses and beautiful scenes of the Nebraska outdoors, check out Love Finds You In Valentine, which releases on DVD on June 7th.
Kennedy Blaine (Michaela McManus), a young woman studying law in L.A. finds out that her father has deceased and that she has inherited his ranch in Valentine, Nebraska—the town where her parents had fallen in love. Eager to pursue her life in California, her first instinct is to sell it. But there is a catch: she must visit the ranch and see it firsthand before selling it.
Valentine holds a heavy history. More than just a romantic place for Blaine’s parents, it was also a place of animosity. The two families had been at odds with one another and Blaine’s grandfather (Edward Asner)—who had had nothing to do with Kennedy for years—continues to harbor the grudge. He does not welcome his granddaughter’s visit.
But granpa is not the only one not thrilled to see Kennedy. Neither is the family ranch caretaker, Steve (Diogo Morgado). He sees Blaine’s visit as a threat.
To Steve and his mother June (Lindsay Wagner), the ranch was their entire lives. They loved the land and the horses treated them with utmost care. They were not confortable with any thought of it all being sold.
Other contentions arise in the town as Kennedy ponders whether in fact she should sell it or not. Its raw beauty and feel of authenticity capture her heart. She starts to fall in love with its unusual charms—as well as those of the caretaker.

Screened earlier this year on UP TV, Love Finds You In Valentine is a sweet story to own on DVD.
Learn more about the film here: www.anchorbayentertainment.com.
Janey DeMeo M.A.

Posted by Janey DeMeo at 3:47 PM No comments: