Step Into Your Future: A Women's Guide to Business Success


If you’re a small biz owner--or want to become one--then this book’s for you: Step Into Your Future: A Women's Guide to Business Success by Rosemary Hossenlopp (Morgan James Publishing).

Rosemary Regier-Hossenlopp, MBA . . .is an expert on the mindset needed for business change. She is the founder of Business Success Plan group and inspires small business owners, professional services consultants and other women leaders to create personal business plans. She makes it easy for business owners to define and execute success plans. Her book on Step Into Your Future: A Businesswoman’s Guide to Success sets the standard for realigning to current market needs.

Here’s what Rosemary tells us about her book:
“What specific incident inspired you to gather together this information and put together a book?

→ Rosemary Regier-Hossenlopp: The heart of success is figuring out what gets you the best results. You hear about business planning techniques that can help you focus on getting the business results you want. But you procrastinate in implementing them. I know this because I have been there too. It is overwhelming when you need to be the plumber, the accountant, the salesman and the person who delivers the goods. It is hard to make the time to work “on” the business and not work “in” the business. More planning advice is available at www.StepIntoYourFuture.com/teleseminar/

“What’s specific inspiration changed your life … and why do you feel it had such a ‘mind-shifting’ impact on you?”

→ Rosemary Regier-Hossenlopp: I believe in easy; an easy way to see what you need to do and came up with a quick process that allowed me to identify steps that accelerated my success. You can get more information at www.StepintoYourFuture.com/teleseminar/

Oh, and while we're on the subject of stepping into the future, what about our kids? Check out the new version of my biblical parenting book, Heaven Help Me Raise These Children!--Biblical Answers to Practical Parenting Issues.

That's all for today, readers. See you soon. Same blog, same time . . . (Whatever time you happen to click in.) Keep reading the good stuff.

As a music fan with a strong musical bent, I’ve recently been fascinated by a duo I discovered at this year’s Grammy awards: Robert Plant & Alison Krauss for the album, Raising Sand. Their voices blend in dazzling harmony, and the music style defies genre. The eclectic amalgam of country-ish ballads, folk-rock with bluegrass twangs and Zeppelin-undertones is stunningly different (dare I say unique?)

What makes this duo so interesting is the astounding audacity of such a mix. Their gifts, backgrounds and specialties come from opposite ends of the music spectrum--almost like night and day.

Krauss, for example, is the most Grammy awarded female artist there is (seventeen to date). She is known as the golden voice of bluegrass whose harmonies offer silky, seamless perfection. Prolifically gifted in harmony and musical talent, she has sung hundreds of songs—including many Christian ones. But is she a Christian? I don’t know. I only know that her singing is beautiful and lends itself blissfully to Jesus ballads.

Plant, on the other hand, hard rock musical icon best known as the vocalist of the seventies rock band, Led Zeppelin, was new to the Grammy scene. He never received a Grammy back in the day. (Not until he collaborated with Krauss on Raising Sand, which resulted in them prizing a packet of them.)

Still, Plant’s talent has not gone unrewarded. In 1996, he and his Led Zep colleague, Jimmy Page (best known to Plant as “Pagey”), were awarded Best Hard Rock Performance for the song "Most High" from their album Walking Into Clarksdale. But this is disturbing.

The lyrics and music video to Most High are nothing short of Satanic. The song is clearly a worship song--not to the true Most High God, but to the sources of darkness and the lyrics are filled with satanic, Bible poking symbols such as: “olive tree consumed by fire,” “David seed” (referring to Christ), “ a king a moved the stars and the son,” (yes, “son” as in Son of God) . . . Or, what about this line, “Who hides the east from the blind man's eye?” (East refers to resurrection – and we all know who blinds the eyes to keep people from believing Christ rose from the dead.)

For a song worshiping the “lord most high,” the song is loaded with satanic symbolism. But if that doesn’t convince you, check out the graphic video on Youtube. (Please do not show it to children. It’s highly disturbing.) Satanic symbols run riot in this visual, ranging from a black goat, a huge black creature with horns, other monsterish looking creatures and numerous dark icons.

Jimmy Page, in fact, has a long history of occult dabblings. I’m not sure about Robert Plant. He’s written some creepy lyrics but is he conscious of what he’s writing or is he just a pawn? I don’t know. For the highly renowned melody, Stairway to Heaven, he claims that something just pushed his pen to write. (And, yes, the song—beautiful is it is—apparently also contains hidden occult symbols). Find out more about Led Zeppelin and the occult here.

So what am I getting at here? I’m really just thinking out loud. I’m not one to seek for demons everywhere. Far from it. I’m not convinced, as some are, that just hearing certain kinds of music automatically opens you up to demons (although I’m not saying it couldn’t. I think it depends where your heart’s at. And I don’t credit Satan with as much power as some like to believe—although his lures are crafty). But I think we must be mindful of what we hear, and be diligent to discern the enemy’s strategy’s to slither into every aspect of art, culture, politics . . .

Look, I’m a down-to-earth sorta gal. I love Jesus. And I love music, art, words (although not to the same measure as I love Jesus). But I’ve been culprit to singing words without meaning them at times. And, before knowing Jesus, I subconsciously wrote some dark poems. While that’s clearly not the case with Page whose occult connections are flagrant, where does Plant stand in all of this? Is he just led by the flow regardless of its source? Or is he conscious of the depths of evil perpetrated in the lyrics of some of his old music? I do hope that singing with a bluegrass icon and dabbling in good ol’ Americana expose him to a whole lot more than just alternative music styles. I hope that the purer roots of some of America’s music rub off on him.

I wonder if Krauss knows the Lord (she’ll certainly have heard of Him). I hope that Plant’s heart is open (hey, he’s in his sixties so he could be pretty set in his ways by now). Maybe it’d be a good thing to pray for this duo—that both would come to know the real, true MOST HIGH. And His name is Jesus.

Check out Chris Tomlin's glorious song, Awesome Is The Lord Most High on Youtube. 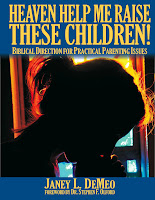 I'm also a contributing author in another great book, A Cup of Comfort Women of the Bible Devotional. This book includes twelve of my devotionals--each featuring a special woman of the Bible and highlighting what her life teaches us. The book is an easy read, rich in anecdotes which increase your knowledge of and hunger for the Bible. It makes a great gift.

I hope you check out these books. And please leave me a comment.

www.JaneyDeMeo.com / www.orphansfirst.org
Posted by Janey DeMeo at 9:38 PM No comments: