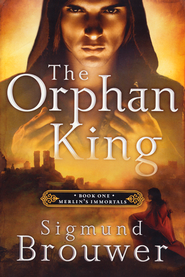 The Orphan King by Sigmund Brouwer is a character-driven tale of mystery and adventure.

Young Thomas, an orphan teenager, learned nothing about his origins and chosen destiny in the monastery in which he was raised. It was the dying words of Sarah, the only mother figure he remembers, that pointed him to his purpose: “My greatest fear was that they would find us and make us a sacrifice beneath a full moon. Now you, Thomas, must help us destroy the circle of evil.”

And evil indeed lurked throughout every nook and cranny of Medieval England at this time. Especially in some dreadful parts of the country.

Thomas’s quest sets him on a journey to Magnus—a formidable place—where he hopes to cut evil to the core. But he does not voyage alone. His expedition is shared by some unusual characters which include a knight whose intents evoke suspicion, a beautiful young girl with her own air of mystery and a capricious young thief. Together they must brave the fronts of Magnus knowing it could well cost them their lives.

The Orphan King is not fast-paced—a plus for those who like to relish the journey slowly—but a tad tedious for those who like more action. Still, Brouwer is a quality writer with tight description and believable character portrayal. His words paint on the canvas of the imagination with ease.

I reviewed this book as a fellow blogger in the Christian Science Fiction & Fantasy blogtour. Check out reviews on Becky's blog also.

A similar version of this also appears in The San Diego Christian Perspectives Examiner and in Assist News Service.

I did like it, yes, Phyllis. But not as much as I'd hoped. Might have been my frame of mind... Books grab you differently depending on where you're at at the time.